Through their research, they came across a scrapbook of photographs of University of Leeds War Work from 1914 to 1916.  Alongside photographs of laboratory research and experimental farms were included evocative photographs of the Leeds University Officers Training Corps (OTC).  The OTC photographs showed general military training of the OTC including rifle training, physical exercises, and some basic signalling including Morse code tapper training and flag signalling.  These two methods of signalling, one old and one new, were key to British Army signalling during World War One.

The Officer’s Training Corps (OTC) was officially established in July 1908 as part of the general reform of the regular and auxiliary forces of the British Army instigated by Lord Haldane.  However, their origins lay in voluntary military work in the education sphere from the mid-nineteenth century onwards.  The formation of the OTC was a direct response to concerns about the supply of adequately trained officers in the event of war.  The OTC was divided into the Senior Division for universities and the Junior Division for schools and Leeds University OTC, established in 1909, was part of the former.

Further details on Leeds University’s OTC during World War One has been provided by Dave Stowe from the Legacies of War project at the university:

It is estimated that no less than 1600 officers from Leeds University were commissioned during the Great War. These numbers included past and present and ex-members and cadets of the university officer training corps among the staff and lecturers who also served. More than 290 officers and other ranks are known to have been killed or died of the 328 names listed on the memorial panels. Many more were wounded or injured and more than 290 military honours were awarded in total – including one VC. Captain David Philip Hirsch was awarded the Victoria Cross (Posthumous) for his part in the fighting when serving with the 4th Yorkshire Regiment in April 1917. D.P. Hirsch had joined the Leeds University OTC as an extra-mural cadet in December 1914 and was commissioned four months later.

Military communications during World War One

A pigeon being released from a port-hole in the side of a tank, near Albert in August 1918. IWM Q9247. Image licensed via IWM Non-Commercial Creative Commons license.

Military communications during World War evolved to meet new battlefield and military challenges during this period. Battles were won and lost on the strength of an army’s ability to communicate on the battlefield.  New and old systems of communications were used side by side.

However, other systems of communications were also needed to be used in parallel with and as a backup to telegraph and telephones.  The British Army was forced to adapt, using older forms of communication such as carrier pigeons and written messages delivered by runners and messenger dogs to keep the lines of communications open.  Messenger runners had one of the most dangerous jobs in the war having to run across open ground and risk being shot by snipers in order to make sure a message was delivered.  Signalling flags were also used but could be only used in the daytime and were easily visible to the enemy.

Morse code during World War One 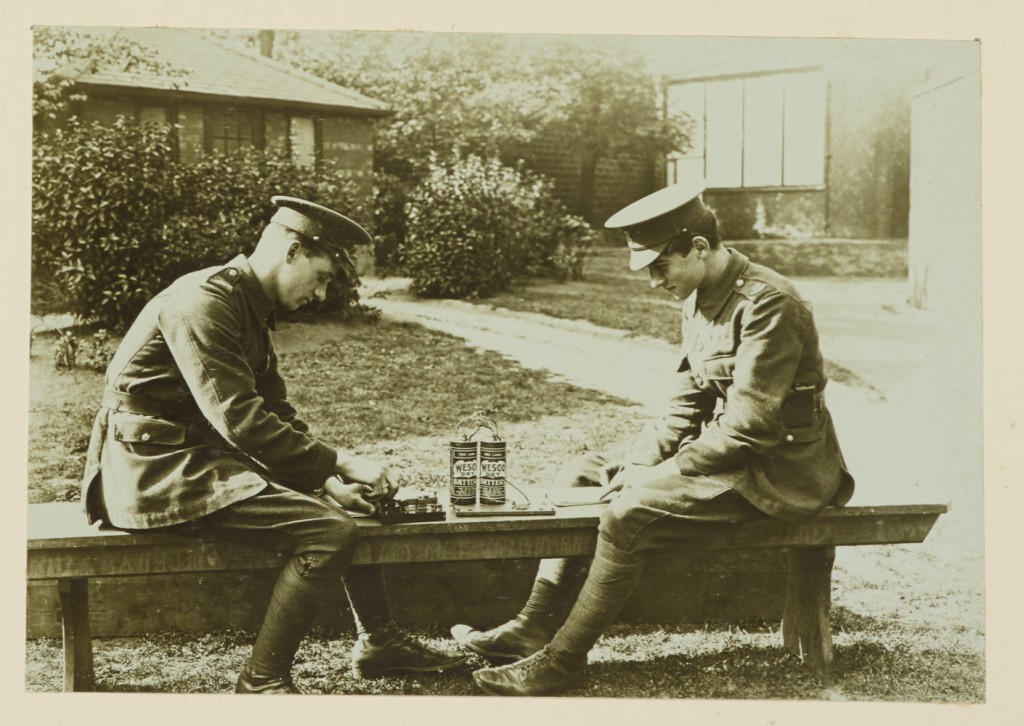 This photograph shows two young officers being trained in the use of a Morse code.  It is impossible to tell from the photograph whether they are using wireless telegraphy, ordinary telegraphy or the use of the buzzer telephone but all three used Morse code during the war.

These were also problems for Royal Flying Corps pilots when they began to use wireless sets early in the war.  In 1915, Royal Flying Corps pilots began to experiment with wireless to tell soldiers where to aim their large artillery guns. However, it was still a new technology and was difficult to use while flying an aeroplane.  As with use in the trenches, wireless messages could also be intercepted by the enemy.

Morse code continued to be used as an international standard for maritime distress until 1999 but had been discontinued by many navies prior to this.  When the French Navy ceased using Morse code on 31 January 31 1997, their final message was “Calling all. This is our last cry before our eternal silence.”

Flag signalling during World War One 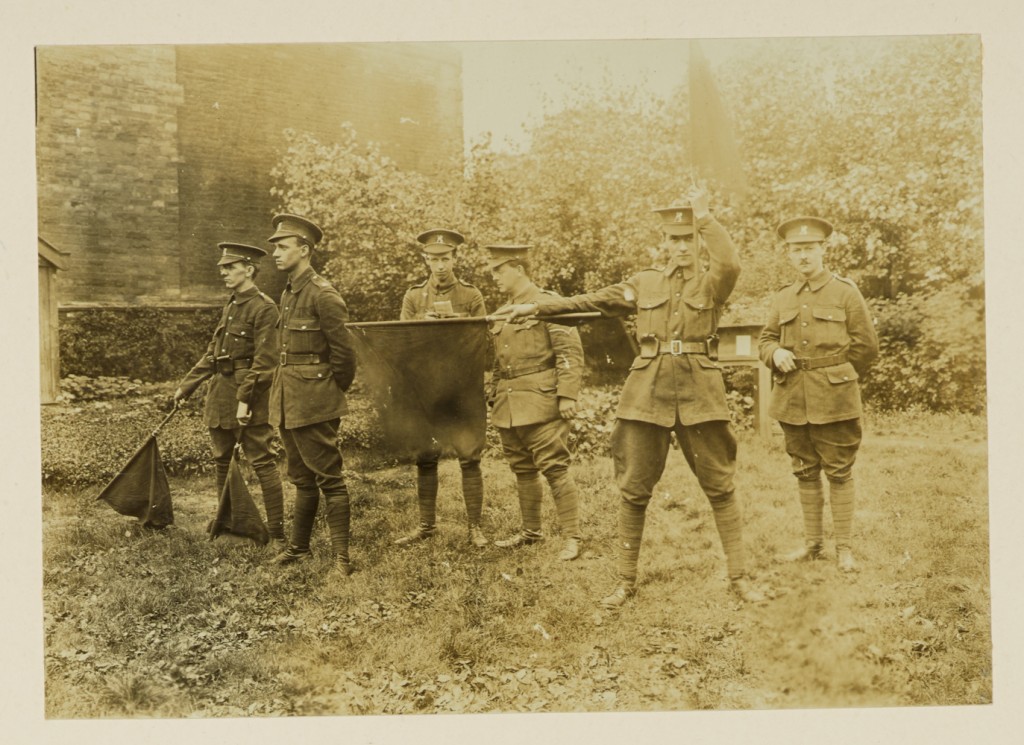 Alongside modern electrical apparatus, other, older methods of communications continued to be used throughout World War One and beyond.  Visual methods of signalling included Begbie lamps (a paraffin-burning lamp which could be used over relatively long distances), trench signalling lamps, heliographs, and flag signalling.

Flag signalling was used on land as well on sea and was usually referred to as “semaphore” when used at sea.  In both cases, fabric flags were used and, in the case of flag signalling on land, blue and white flags were usually used.  In the case of lightweight silk flags, a competent operator could reach about 12 words per minute,were used to send the fastest messages.

Flags were portable but needed good visibility and daylight.  Semaphore flags used a form of signalling based on Morse code and required a trained signaller and a trained receiver, with a telescope, pencil and notepad, at either end. 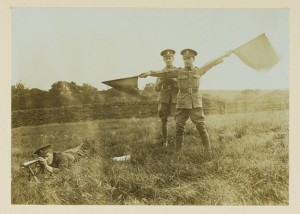 Signallers were regularly employed in forward positions to assist with artillery spotting and provide to information about their targets. In these often-isolated positions, signallers were often vulnerable to enemy shelling and attack and, as a result, many signallers lost their lives.

Visual signalling were quicker than sending a messenger but were easily intercepted by the enemy and could only be used over short distances.  As a result, flag signalling fell out of use in conflict communications by 1916.

For further details of flag signalling in the British Army, see The Royal Signals .. Signalling with Flags.

These photographs were supplied to Legacies of War by Joanne Fitton, Special Collections Manager at the University of Leeds, and are used with kind permission.

The University of Leeds also holds the Lidde Collection which includes the personal papers of well over 4,000 people who lived through the First World War, and approximately 500 who experienced the Second World War.

For further information, see the Leeds University OTC tribute video put together from original historic and archive material by Legacies of War‘s Dave Stowe.  Dave has collected a number of images and press cuttings linked to his research into the Brotherton Library’s War Memorial at the University of Leeds.

Liddle Collection at the University of Leeds

The Royal Signals .. Signalling with Flags