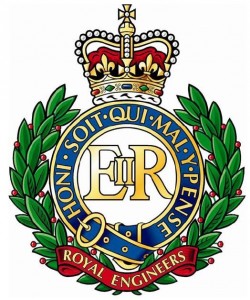 Royal Engineers Cap Badge, as of 1900. Image available in the public domain via Wikimedia Commons.

Daily rates of pay are divided into Officers and Warrant Officers, NCOs and men and are divided according to Corps.

In both categories – Offices and Warrant Officers, NCOs and men – the Royal Engineers (which then incorporated the Signals Service) were amongst the best paid men in the British Army in 1914 and 1915, particularly at the more junior officer rank levels. Officers in the Royal Engineers shared the same basic minimum daily rate of pay as other corps but were awarded “Engineers Pay” which was an additional payment of between 20-50% of their baseline pay. In addition to their basic pay and additional “Engineers Pay”, Second Lieutenants could be awarded a further 1s 6d if they were certified by their Commanding Officer as to their technical efficiency.

These are the minimum daily rates of pay for typical ranks or appointments of all arms. All rates in Shillings (s) and Pence (d).

a The figure in bold for the Royal Garrison Artillery includes Armament Pay which was payable only if certified by Commanding Officer with regard to the Second Lieutenant’s technical efficiency.

As can be seen by this table above, the Royal Engineers’ rates of pay (marked in red) were some of the highest across the different corps and different ranks. They were comparable with those of another technical occupation, that of the Royal Flying Corps which has been omitted as their ranks do not necessarily map readily onto those of the other Army corps at this time.

The high rates of daily pay offered to the Royal Engineers and indeed to some other Army corps show the financial value and importance of technical and specialist expertise to the British Army in the early stages of the First World War. Further to this, these figures also offer a fascinating comparison of the importance and value of engineers, especially younger officers with technical expertise, in the British Army at the start of the First World War.