Summary: This paper summarises the factors that affected the development of CW radio communication during the period up to 1918. It shows that most of the important circuits had been invented by 1914. The major technical factor affecting the successful development of CW radios for battlefield communication was the unavailability of robust radio valves: these did not become available until late in 1915 with the introduction of the French TM valve. Up until that time almost all radios were spark transmitters and crystal detector receivers. 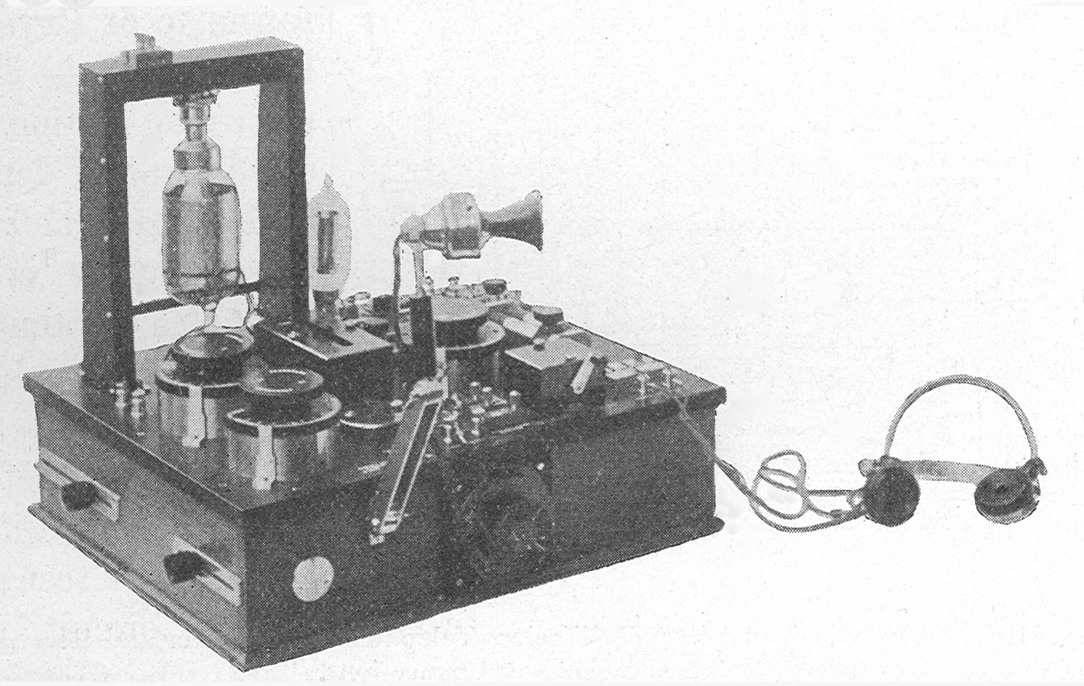 In 1919, Marconi’s and GEC decided to set up a joint company for valve design and manufacture that could benefit from their pooled know-how and valve patents. The company was incorporated on 20 October of that year and was originally called Marconi-Osram Valve Co. Ltd., but the name was changed in the following year to M.O. Valve Co. Ltd. (MOV). Production was at the Osram-Robertson Lamp Works and included many of the types previously manufactured by Ediswan.

Towards the end of 1911, Henry J Round of the Marconi Company commenced the design of a diode valve. Because of other commitments, however, this activity was suspended until November 1912, when Round extended his earlier work to include both diode and triode valve development. There is good reason to believe that the design of these valves was influenced by the soft valve development of von Lieben, Reisz and Strauss, as a result of a technology exchange agreement between the Marconi and Telefunken companies.

The first successful soft valves of Round were manufactured by Ediswan in 1913. Amongst the earliest of these were the type C, a receiver valve, and the type T, a transmitter valve, both of which were used in World War 1 in various items of radio equipment (see below). The type C had a platinum wire filament, which was oxide coated; the grid was of fine mesh nickel wire that fully surrounded the filament, and the anode was a solid nickel cylinder.

A distinctive feature of the C valve (and indeed of most of the other Round soft valves) was a glass extension tube at the top of the bulb which contained a wad of asbestos. As time progressed, the gas pressure in the valve tended to fall, resulting in a loss of sensitivity. In order to raise the gas pressure to an optimum value, it was necessary to heat the asbestos, either electrically, or by holding a lighted match close to the extension tube, which released occluded gas into the enclosed glass bulb.

The type T transmitter valve had three filaments of tungsten or platinum wire. According to Picken ‘Although usually classed as a soft valve, it was actually exhausted as thoroughly as its construction and vacuum technique available permitted. The pellet at its extremity was inherited from its prototype, the soft receiving valve, and was an unnecessary appendage’ [14]. Some of the valves were manufactured without an extension tube at the top; instead they had a metal cap which was used as a top support

The type TN was introduced in 1914. This valve, together with the type C, was used in the Marconi Short-Distance Wireless Telephone Transmitter and Receiver (Early in 1914, the two Marconi engineers, Round and Tremellen, used the type T valve to transmit voice signals over a distance of 70km, probably using equipment similar to this.) [15].

According to Dowsett the TN was a soft valve and fitted either with two lime-coated platinum filaments or plain tungsten filaments. This meant that a comparatively high anode current could be obtained without using a very high anode voltage.

Other soft receiving valves made for the Marconi Company by Ediswan were the types CA, CT, D and N. Amongst the small transmitter valves, apart from the Type T, there were also the LT and TN.

There is little doubt that the Round soft valves were very difficult to manufacture, but during the early years of World War 1 there were no suitable alternatives. To quote from Round [16]:

It was probably fortunate in the first year of our work that we used the soft valves because no hard valve had been constructed which can compare with these ‘C’ type tubes as high-frequency magnifiers. These necessitated, however, trained men in their manufacture, and trained operators for their efficient use … Again and again we lost the knack of making good tubes, owing to some slight change in the materials used in their manufacture. A thorough investigation was impossible, as all hands were out on the stations. On several occasions we were down to our last dozen tubes.

The principal use of the C valve during WW1 was in a single-valve direction-finding equipment where its sensitivity was equivalent to three of more of the French TM valves in cascade. (See next section of this paper.) These DF receivers were mainly located around the south and east coasts of England and some were also located on the European mainland.

The T valves was used in some radios of the Royal Flying Corp but little information has been found on these. The equipment identified were a W/T 120-watt ground set covering the wavelength 600 to 1000m and used as a tonic train transmitter. There was also another ground station version of this which was used for wireless telephony. Dates of installation and quantities produced are unknown but there would have been used in small numbers, probably from 1916.

One of the most important of the early European triode valves was a device developed under Colonel (later General) Gustave Ferrié who was in charge of the French Military Telegraphic Service during World War 1. The valve, which came in two slightly different constructions known as the ‘S’ and Métal, was developed from an audion sample that was brought to France in August 1914 by Paul Pichon [17]; it had a straight tungsten filament of length 21mm, a spiral grid with 11 or 12 turns made either of molybdenum or nickel of length 16mm by 4.5mm diameter, and a cylindrical nickel anode 15mm long by 10mm diameter. The filament rating was 4-volts, 0.65-amps. A patent application for the valve was taken out in October 1915 [18]. It was immensely successful and widely used during World War 1, during which time over 100,000 were manufactured by the two French companies, Fotos and Métal.

The TM was a hard valve, evacuated to a low pressure, and during the manufacturing process the glass and metal parts were heated to a sufficient temperature to release the occluded gases. An interesting feature of the valve was the use of a four-pin base, which later became a standard throughout Europe, including Britain. The electrodes were mounted on a glass stem inside a spherical glass bulb. At the top of the stem the glass was formed into a ‘pinch seal’. From here nickel support wires went to the electrodes, and at the bottom of the seal copper wires connected to the external pins. The airtight seal was formed by small pieces of platinum wire welded to the pieces of copper and nickel. Platinum was chosen because its temperature coefficient of expansion matched that of the glass. The base (or cap as it was frequently called) consisted of four pins mounted in an insulating material and surrounded by a metal shell.
With the introduction of the French valve it now became possible to manufacture reliable and robust CW radios for wireless telephony and telegraphy. The first equipment using this new valve came into use early in 1916.

By 1916, the French TM valve was being produced in Britain where it was known as the R-valve. Amongst the first manufacturers were BT-H and Ediswan. During World War 1, it was also produced by Cossor, Cryselco, the Osram-Robertson Lamp Works of GEC, Metropolitan Vickers, Stearn and Moorhead Laboratories of San Francisco.

It is interesting to note that the R valve was not manufactured by Osram until September 1917.

The principal disadvantage of the TM and R valves was the high internal capacitance between the grid and anode which restricted its use as an RF amplifier to frequencies below 600 kHz.

A partial solution to this shortcoming was the design of a quite remarkable valve by Capt. Henry Round of the Marconi Company in 1916. This, the type Q, featured small size and low capacitance.

The valve was made by Edison Swan for the Marconi Company, but production was transferred to MOV in 1919 following its formation. (This last statement needs checking. MOV replaced the Q valve with an improved detector, the Qx, in 1921.)

The valve has a straight tungsten filament terminated into pointed metal caps at each end. The grid is a nickel wire gauze and the anode a nickel cylinder. Both the grid and anode connections are taken to two further caps near one end of the tubular glass bulb. Physical details are as follows:

The valve has a very high value of anode resistance (150kΩ), which results from the large spacing between the anode and grid electrodes. For this reason it was not particularly suited for use as either an r.f. or a.f. amplifier, its main use being as a detector. Nevertheless, three Q valves were used in the Marconi Field Station Receiver Type 38a—one as a detector and the other two as ‘note magnifiers’ (an old name for audio amplifier stages) [19]. More usually the Q valve was used in conjunction with the V.24 (see below).

Like the Q valve, the V.24 was designed by Capt. Henry Round of the Marconi Company. The design probably dates from 1917, with production in 1918. Manufacture was initially undertaken by Ediswan, but was transferred to MOV in 1919. It continued to be manufactured into the late 1930s. The type reference V.24 was chosen because the valve was intended to operate from an h.t. supply of 24 volts, which was the standard battery in use by the British armed services.

During the last year of WW1 the prime use of the V.24 was in direction finding receivers, such as the Type 55 used, principally, by the British navy.

By 1917 many other valves were being manufactured for use in military equipment. Those produced specifically for the Navy will not be covered here but a detailed description of these can be found in a paper by Gossling [20].

The type B was a higher power version of the R with a 6-volt, 0.84-amp filament and was rated as a 30-watt transmitting valve. This, and the R valve, were also manufactured in the US by Moorhead. The Osram-Robertson Company first made the B valve in November 1917.

Two other transmitting valves were the T2A and T2B, introduced by Osram-Robertson in August 1917. Both of these valves were rated at 250 watts.

Two other low-power transmitting valves were the Types AT25 and F. Some higher power valves were also made for the Navy.