Regular readers of Inside MHS Oxford may recall our article about the fulfillment of a 30-year ambition by Matt Westcott: to coordinate an orchestra of ZX Spectrums to perform an excerpt from Mahler’s 1st Symphony. This historic event came off the back of our Geek is Good special exhibition in 2014*, which featured a section about the birth of home computer programming through the likes of the Spectrum and BBC Micro.

Not content with making a small piece of computing history in the Museum of the History of Science, Matt has also made a nice little documentary about it. So now you can relive the moment in all its 8-bit glory.

* The Spectrum symphony itself was part of an event called Geek Out, although in the film I mistakenly describe the exhibition as ‘Geek Out’ rather than ‘Geek is Good’ – apologies to geeks everywhere.

In the late 1980s, amateur astronomer Jack Ells built an Automatic Photoelectric Telescope (APT) that, after a half-hour set-up, could operate unattended all night under the control of a BBC microcomputer.

This ‘Robot Telescope’ was used to collect data about variable stars and was so well constructed that it could produce work of a professional standard.

The APT being set up by Jack Ells; the top image shows a 1/6 scale model of the telescope

Jack Ells was a mechanical engineer by profession, working for British Petroleum and obtaining many patents for the company during his career. He was also a keen amateur astronomer, and in 1988 the British Astronomical Association presented him with the Steavenson Award for “an outstanding contribution to observational astronomy,” mainly for the construction of the APT, which continued to be used by others for several years after his death in 1990.

An account of Jack Ells’s astronomical work is outlined throughout Advanced Amateur Astronomy by Gerald North (CUP, 1997), the first edition of which was dedicated “TO MR JACK ELLS, skilled innovator and observer of the first order.”

Jack’s son Peter Ells, who wrote the software for the BBC Micro, gives a Table Talk at the Museum about the Robot Telescope on Saturday 18 October 2014, 2.30pm.

This event is part of the programme for our Geek is Good special exhibition.

Schematic diagram of the APT system; the Signals section shows the stages required to input the photon count to the BBC microcomputer

Our current Geek is Good exhibition has inspired a lot of geeky activity around here recently. We’ve had pixelated spectacles specially made and then stolen from the Ancient Geeks outside the Museum; there’s been some geeky object-handling every Sunday throughout the summer and if you haven’t checked out the Geek Confession Booth already then watch some of the highlights here. 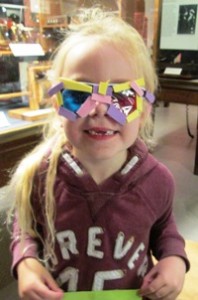 We also had a little family competition too. At the end of August the Calling All Geeks event at the Museum saw families assembling crystal radio kits, playing with retro games – including Magic Robot, Rubik’s Cube and Spirograph – and making their own geeky 3D glasses. 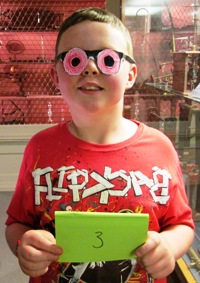 We decided to offer a prize of a limited edition Geek is Good mug from the Museum shop to the most creatively-inspired geek-chic pair of specs made on the day. And here are the winners: Phoebe White and Jack Turnbull!

We liked how Jack made use of our retro Spirograph to create jazzy lenses for his glasses and we thought Phoebe’s use of colour and differently-sized shapes to create a pixelated effect was very clever. So congratulations to Phoebe and Jack – little museum geeks in the making.