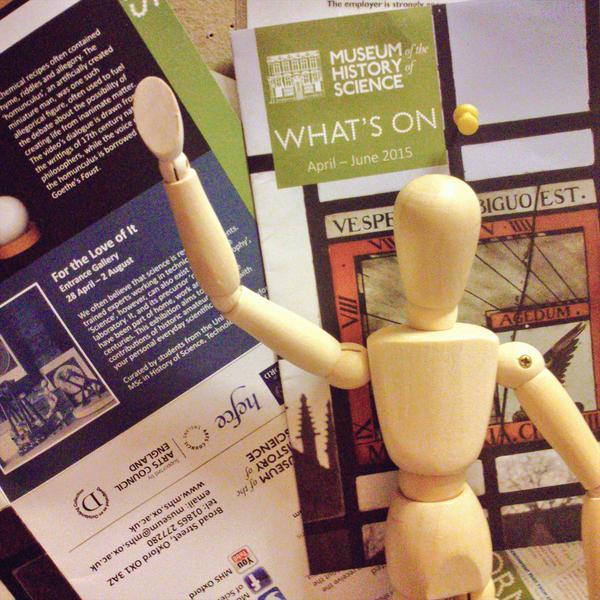 One of the themes that has been running through our exhibition and social media is a little figure the team named Dale. Dale is inspired by the wooden figure present in Washington Teasdale’s cyanotype photograph titled ‘Still Life Arrangement of Items Relating to Astronomy‘, and a replica of the photograph is present in our physical exhibition. In this photograph the wooden person has been arranged to show the passionate amateur astronomer, dedicated to his subject. 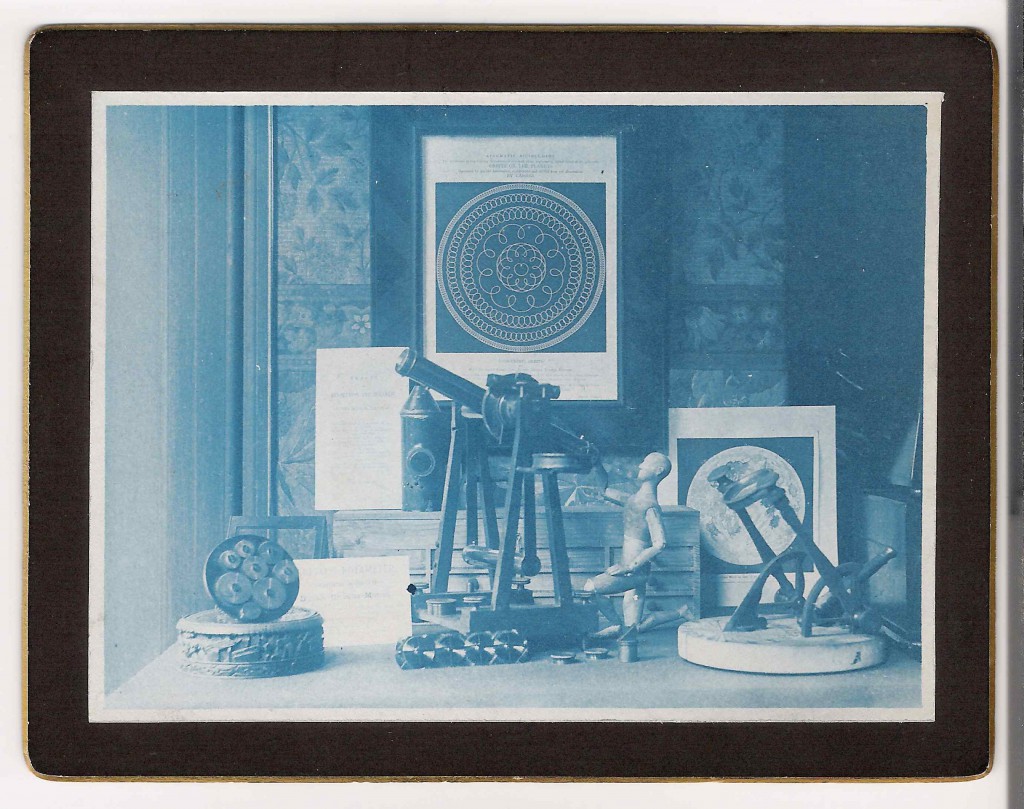 Here is the photograph (Cyanotype) of a ‘Still Life Arrangement of Items Relating to Astronomy’ by Washington Teasdale, c.1880 (Inv. 38479)

For us, the figure represents everyone in our project who is doing everyday science ‘for the love of it’. Because of this, we wanted to bring it to life, and so we bought a wooden figure just like the one in Teasdale’s photograph and called it Dale. We have taken Dale on a range of adventures to other museums, and he helped out with our event and other scientific projects, which we talked about on our twitter!

In addition to our physical Dale, we have a number of fun drawings of Dale running through our advertising material and exhibition graphics. For those of you who can’t make it to the Museum to see these, we have added them below. All credit for these fantastic drawings goes to Trevor Stace. When it came to designing the drawings, Trevor Stace had full artistic license to do anything that he thought would represent the exhibition and our goal to show that science can be, and is, fun. We gave him a list of objects from memories which had been given to us at that point and using that he created the images below. He later stated that he enjoyed the process of trying to portray Dale doing science activities, especially since he envisioned Dale being so small. But, it shows that no matter what size you are, you can pursue and explore things that interest you. 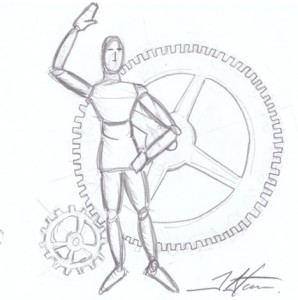 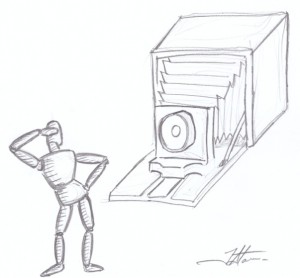 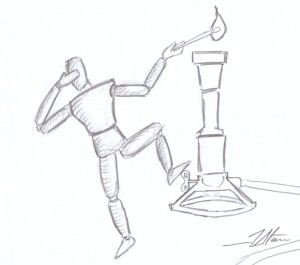 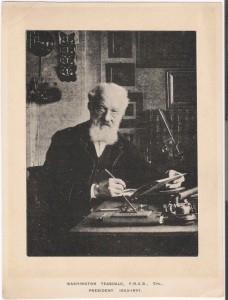 Print (Collotype, from a Photograph) of Washington Teasdale at his Desk, c.1897 (Inv. 35156) This is probably a self-portrait of Teasdale.

Story: The photograph above was chosen as the main exhibition image because it was taken by an amateur scientist and photographer, Washington Teasdale (1830-1903). Washington Teasdale was an engineer by profession, but in his spare time his interests ranged greatly through many areas of the sciences. In this respect he was very much a typical Victorian amateur scientist, because he did not like to focus on one single science, but all of them. Victorian scientific amateurs can also be called gentlemen scientists. These were men of means who had the time and the money to invest into their hobbies. The materials and instruments needed were expensive and it would require extensive free time to set up and perform experiments. The sciences they dabbled in included astronomy, geology, geometry, microscopy, mechanics, meteorology, and photography. In addition to photography being one of his hobbies, Teasdale used it to capture and represent his scientific interests. 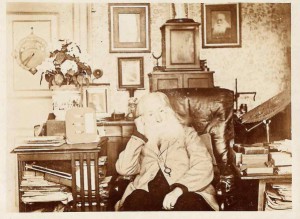 Photograph (Gelatine Print) of Henry Perigal in his Study, by Washington Teasdale and George Smith, April 4, 1897 (Inv. 76721). Henry Perigal was a British stockbroker and amateur mathematician, and a friend of Teasdale.

In our chosen photograph he has arranged a number of astronomical instruments – which he may have used personally – as a way to display his interest in astronomy and the orbital motion. Teasdale also took a photograph of a similar representation using a tableau for biology and microscopy, and we will be displaying it in the exhibition. Cyanotype photographs are blue because they are made by being exposed to different chemicals and light at an earlier point in the developing process. Teasdale used this process to produce many photographs, but he also took gelatine print photographs, often of portraits of scientists who he met whilst a Fellow of the Royal Astronomical Society.

Teasdale was from Leeds, and so the majority of his photographs were taken there. He even helped re-establish the Leeds Astronomical Society. He liked to portray himself as a modest amateur, and not one destined for great things or professional status. Even though he saw himself as modest, he frequently made trips to London to visit friends who were amateur scientists and to attend meetings of various scientific and non-scientific societies which had become a staple in Victorian Britain.

If you would like to learn more about Washington Teasdale you can visit the narrative on the website here, or visit the display of a number of objects from his collection in the entrance gallery of the Museum of the History of Science.

We have named the small mannequin in the cyanotype photograph which is being used as our main exhibition photograph as Dale, after Teasdale, and hope to take him on a range of adventures investigating our love of everyday science. Look out for future blog posts on this!