Many of us are hoarders. We collect objects with a common theme, scoop up shiny trinkets that catch our eye, or just plain refuse to throw old stuff away. As the years pass, all these things accrue, on shelves, or tucked into nooks, crannies and cupboards.

Gathering collections for museums is not always dissimilar; museum collections tend, over time, to expand much more than they contract. Naturally, people who work in museums are, on the whole, the sort of people who like to collect and store objects. It can be hard to resist a new addition to the collection when something becomes available, either at an auction or through a donation.

Items can come from a variety of sources, including dealers and auctions. Sometimes individual objects are received, but often a group or collection is offered as a whole. What’s New?, the temporary exhibition in our Entrance Gallery (11 June – 22 September 2013), shows a selection of  objects from three collections that were recently donated as gifts to the Museum’s collection.

Unlike hoarding at home, there is a formality to the process of accepting items into a museum’s collection. This process is called accessioning, and every object that becomes part of a collection must be accessioned. The process may vary across institutions but generally involves checking an item’s suitability for the collection, its provenance (including legality), its condition, and any safety concerns from a materials point of view. If accepted, this information is entered with the object’s record into the collection database and it is assigned a unique inventory number.

Once accessioned, an object falls under the museum’s duty of care in perpetuity. For this reason, the acceptance of new material has to be considered seriously – sadly we have neither the space nor the money to take everything we fancy!

The exhibition includes a selection of science equipment used for teaching in the mid-20th century, donated by Headington School, an independent school for girls in Oxford. Two large electrical meters – an ammeter and voltmeter – were evidently used to display the effects of experiments to the class. The meters were produced by the Electric Construction Company, a major British electric supplier for much of the 20th century. The school’s collection also includes a thermopile – a brass cone-shaped device that can detect heat at a distance – and a Geissler tube, which lights up when a high voltage is applied to the electrodes at each end.

Another collection represented in the exhibition was donated by the University of Oxford’s Department of Engineering Science. It features a handsome brass gyroscope, dating from around 1905, and a photometer from around 1910, designed by Alexander Trotter, then a leading practitioner in the measurement of illumination.

The final collection on show is a curiously pleasing one. It is a selection of rulers, measures and slide rules drawn from a larger set collected by Arthur Whillock (1912-2006), a hydraulics engineer at the Government’s Hydraulics Research Station near Oxford.

Mr Whillock was a founder of the British Weights and Measurements Association, which promotes the value of imperial measures and campaigns against compulsory metrication. He was also an officer of the Dozenal Society of Great Britain, which advocates the use of a base twelve number system over decimal’s base ten.

The collection was used by Mr Whillock in public displays to illustrate the view that “All naturally developed systems from ancient Crete to modern Japan have a spacing of about one foot as a basic unit […] Divisibility by twelve allows a wide range of proportions to be selected.” Now that is hoarding with intent.

Harriet Crombie and Jordan Greco are currently studying for BA in Primary Education at Oxford Brookes University. As part of their second year placement, as well as working in a school, they had the opportunity to work alongside an education officer in a museum in Oxford; they decided to visit the Museum of the History of Science. Here they would plan a session to teach to the children from their class. They reflect on their experience:

“On our first day we made our way down the stones stairs to the basement and met Michelle, the Education Officer, who took us round the 17th century building showing us the many different displays of instruments used in the past by many different people. We didn’t get long however until the first school visited, they had been studying Space, and Michelle ran a session enabling children to look at and touch a variety of objects used by Space explorers.

When planning our session we had to think really hard about what we would want the children to learn, what they could gain from their visit and hopefully take back into the classroom. As the children were learning about France this term, we decided to make this the theme of the school trip.

For us (and we think for the children!) the trip went really well- Jordan and I organised 3 different activities, consisting of a French object trail in the Top Gallery, sketching the French Revolutionary Clock in the main entrance, and creating and using sundials in the basement. To finish off the trip with a fun, whole class activity we taught the children some relevant words to the trip (such as sundial, museum, clock etc) in French to take back to their families at home.

We managed to introduce much of the trip knowledge in school prior to the day, such as talking about the French Revolution and the rising up of the people in France against the Royals so that the Revolutionary clock was more relevant to the children.  Extensions to the sundial activity would be to use them outside during a science lesson.

We both had a fantastic time in the museum made much easier by the support of Michelle, one of the education officers working there. The staff were great to work with and we really felt like we explored learning outside of the classroom. It was a very worthwhile experience and we would recommend it to anyone who has the opportunity!”

The Garden, The Ark, The Tower, The Temple: biblical metaphors of knowledge in early modern Europe, an MHS exhibition held in the Bodleian Library from 2nd February to 2nd May, 1998, had an accompanying book (ISBN 0 – 903364 – 09 – 3). A small print run was made which soon sold out. It can occasionally be found to buy, with the price varying from a few hundred to over a thousand pounds (as I write this it is available for £1,128.75).

The exhibition and book, written by Jim Bennett, former director of the museum, and Scott Mandelbrote, investigate biblical metaphors of knowledge in early modern Europe. 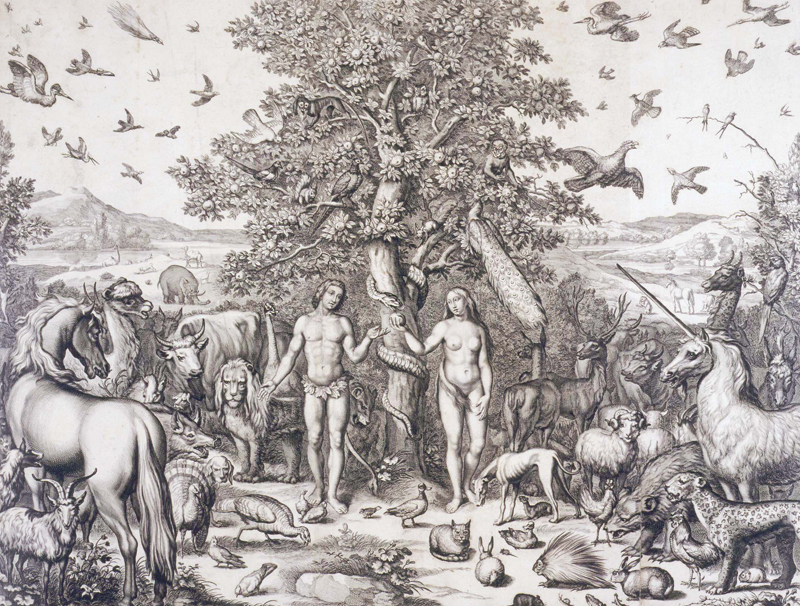 Engraved plate from Ogilby’s 1660 Bible illustrating the state of paradise at the moment of the Fall. The plate was engraved by Pierre Lombart (1620?–1681).

The stories of the Garden of Eden, Noahs Ark, the Tower of Babel, and the Temple of Solomon are among the best known in the Old Testament. They were alluded to frequently during the sixteenth and seventeenth centuries, and were often used at that time to frame accounts of the progress of knowledge. The narrative history which could be found in the Bible presented a coherent story of the growth and decline of knowledge, in which moral and spiritual factors helped to determine natural and practical outcomes.

As metaphors of knowledge, the four stories gave information about both the acquisition and the ideal state of human understanding. But they also issued warnings about the necessary difference between human and divine knowledge and suggested ways by which knowledge might be married to piety and wisdom in order to achieve an improvement in the condition of mankind. The image that they conjured up was thus both hopeful and threatening. It demanded that human beings temper material and intellectual change with spiritual or moral development. The stories seemed to many to allow for the possibility of transforming the world through the application of human intellect and endeavour. Yet they also emphasized the contemporary belief that the earth had once been a better place, and that human ignorance and suffering were themselves the products of disobedience, error, and folly. The knowledge which was needed to change human life and the natural environment for the good depended on an understanding of the dangers of moral frailty as well as of the achievements of intellectual ingenuity. That understanding could best be developed through an awareness of biblical history and a sense of the working of providence, both of which were enhanced by acquaintance with the lessons of the Garden, the Ark, the Tower, and the Temple. …

An online version of this exhibition can be found on the MHS website; a kindle version of the book has been published, February 2013, with the same content plus useful ebook functionality. An interesting and convenient publication which will also help support the Museum’s broad range of work!