Fletcher Wallis is a physicist with a penchant for patents. His collection of corkscrews is formidable and his knowledge of their historical development is gathered in British Corkscrew Patents from 1795, published in 1997 by Vernier Press. It is the ingenuity and imagination of inventors that captivates Fletcher, and in areas far broader than gadgets for opening bottles of wine.

Having given up life as a professional atomic physicist in Oxfordshire, Fletcher has spent the past 30 years or so dealing in antiques from the history of science and technology, with a particular expertise in patent inventions. He buys and sells objects from a stall in London’s Portobello Road, but has also built up an impressive collection of his own; a small museum’s worth perhaps.

It is with a hand-picked selection of some of these inventions, drawn from the 18th and 19th centuries, that Fletcher approached the Museum proposing a small, temporary exhibition on patent inventions. Working with Fletcher, and refining his selection for display, we created Patented, a temporary exhibition running in the Museum’s entrance gallery from 15 January – 10 March 2013.

Patented is a small exhibition – only 14 objects are on display – and so by no means provides a comprehensive account of British patent inventions during the 18th and 19th centuries. But the curious variety of devices on display, along with a few biographical nuggets about their creators, does paint a nice picture of the many ways that inventors sought to make a living by conceiving, and protecting, their ideas.

By granting ‘letters patent of invention’ to an individual, the government aimed to encourage and protect new industrial inventions by giving monopoly rights to produce an invention without direct competition for a period of time. Of course, this didn’t stop people copying, ripping off or just simply lying about their ‘patent’ in order to get a commercial advantage. Not surprising, perhaps, given the onerous bureaucratic hoop-jumping needed to secure patents: up to nine separate visits to various government offices in London, with a substantial fee levied at each, before 1852.

Nonetheless, all but two of the objects displayed in Patented were definitely granted monopoly by the Patent Office. Of the two, a set of facsimiles of horses’ mouths by J. C. Chawner claims to have been patented, although no record exists; and safety stirrups by William Lennan from around 1850 may have been patented in Ireland, but again the record remains elusive, if it ever existed.

The exhibition features an example of the 1784 Bramah Lock, created by Joseph Bramah and displayed in the company’s shop in Piccadilly as a ‘Challenge Lock’. “The artist who can make an instrument that will pick or open this lock shall receive 200 guineas the moment it is produced.” So read the panel in the shop’s window. It was 67 years before American locksmith Arthur Charles Hobbs managed, after 51 hours spread over 16 days, to successfully pick the lock. Hobbs subsequently marketed his own patent inviolable lock. So it goes.

There’s also a very attractive, if devilishly complex, system of reading and writing for the blind, pre-dating Louis Braille’s system by 22 years. Patented in 1813, John Casson’s Panagram uses little wooden blocks, where each face is a different shape and each orientation of the face represents a different letter. If you’re mathematically sharp you’ll already have realised that’s only 24 letters (six faces, four possible orientations of each). The remaining two letters are distinguished by the addition of a little pin. It is not easy to use. But there is a secret message written in ‘Panagramese’ on display in the Museum… Why not visit and see if you can crack it?

And while you’re there check out the strange breathing apparatus, the first stirrups to release the hapless falling horse rider and, of course, the world’s second patented corkscrew, created by the 19th-century Birmingham entrepreneur Sir Edward Thomason.

Fletcher Wallis can be contacted at fletcherwallis@btinternet.com. 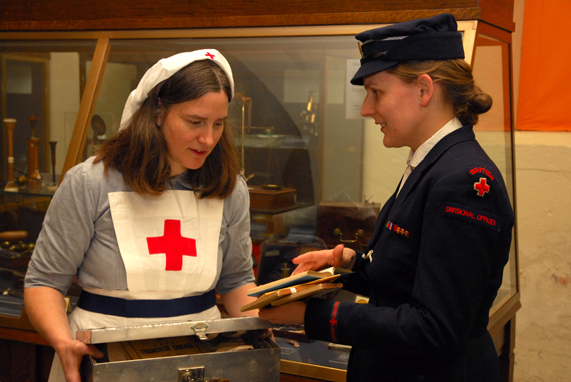 I was very excited when I heard that we had the opportunity to acquire some new objects from the Balfour Museum at the British Red Cross Offices in Winchester, which are to be closed down and the Museum with them. I had been looking for ways to build a Primary school session around our penicillin collection, and the possibility of acquiring some handling objects seemed an ideal way to shape a session, as well as adding to the existing offer for secondary schools about the development of Penicillin. The WWII connection is a great context for the climax of the story of penicillin. Handling objects are useful anyway, for any number of reasons, and education departments are always keen to acquire them, particularly when they are being offered free of charge.

At the end of December 2012, our long list of requested objects was de-accessioned from the Balfour, and found its way to the University of Oxford Joint Museum Education Service. While we will share all the objects (in fact, there is often lending and borrowing between the education departments of all the University Museums), a selection have found their way here, to serve as inspiration and motivation for the creation and promotion of a WWII session for primary schools.

We have been lucky enough to acquire two full indoor and outdoor uniforms, and when one of each came out of the box in the office, how could we resist trying them on? The result can be seen in the photograph above.

The process of acquiring the objects began in October 2012, when I went with a colleague from the Oxford University Joint Museums Service to the Balfour Museum where we found a small room packed with a huge assortment of objects and uniforms, mostly from the period around the Second World War. Armed with a list of the items on offer we viewed a table full of objects selected by the Balfour Collections Manager.

The room was very quiet and we were shy to reveal how many of these objects we would love to have, but just as we were in whispered conversation about how many would seem too greedy, the kind Collections Manager piped up from the corner with “Everything here has to go, so please feel free to take anything that you might like”. It then became a question of reigning ourselves in, and remembering how we were hoping to use the objects for education.

While it was exciting to be choosing objects to take away with us, the rows of uniforms hanging in translucent dry cleaning bags, booklets on topics from first aid to how to deal with gas attacks, bandages, feeding cups, bedpans, first aid kits and myriad other miscellaneous objects hit me with a poignancy that I had not expected.

It was the drawers full of hundreds of medals for service (sometimes engraved with the names of the individuals who had earned them) which particularly struck me. Each of these represents an individual, most likely a woman, and also likely very young, who had no idea of the outcome of the war, nor how long it would ultimately last, nor what post-war England would bring in terms of rationing and hardship.

In a small, blue “British Red Cross Society First Aid Manual No. 1”, inscribed in pencil on the overleaf with “H.G.Rutherford, spring 1939”, I discovered a clipping from a newspaper:

Sniff and Snatch it?

Yes, I mean a gas mask. A hundred letters a day and they all ask me how they’ll know the kind of gas. Here’s a reader’s way.

If you get a choking feeling
And a smell of musty hay,
You can bet your bottom dollar
That there’s PHOSGENE on the way.

But the smell of bleaching powder
Will inevitably mean
That the enemy you’re meeting
Is the gas that’s named CHLORINE.

When your eye begins a-twitching
And for tears you cannot see,
’Tisn’t mother peeling onions
But a dose of C.A.P.

If the smell resembles pear-drops,
Then you’d better not delay,
It’s not the youngster sucking toffee,
But that tear gas K.S.K.

Should you sniff a pungent odour
As you’re going home to tea,
You can safely put your shirt on it
They’re using B.B.C.

If you see an oily liquid
On the road – be on your guard;
It isn’t where a bus was parked,
But that wicked gas MUSTARD.

Thank you, Mr. Staniforth, of Nottingham

And grateful thanks must go to the Balfour Museum for their generosity in donating these exciting new objects to our handling collection, and for delivering them to us here in Oxford.

Christopher Parkin pins an image onto the MHS globe

When I first put together the proposal for ‘The Renaissance Globe Project’, it seemed altogether too ambitious for such a small team with limited resources to deliver. But the temptation to have a go was too great and, with the prospect of partnership and the use of an expanding pool of community volunteers looking for interesting opportunities, we decided to put in a bid to the HLF for funding to support a partnership project. In March we learned that the bid had been successful and were awarded a grant of £15.5k to run the project. The compressed timescale created even more of a challenge given the proposal to include secondary schools in the project!

Over the summer period, the Renaissance Globe Project delivered a varied programme of over 20 family events across all four partner museums involving over 1100 children and 1300 adults. These events engaged children and adults in themed activities discovering the collections and crafting the globes. The globes came together in a final exhibition at the Museum of History of Science in October-November entitled ‘Re-imaging the Globe’. The six ‘Globe Maker’ workshops for children and adults also proved popular, involving 40 children and 20 adults in model-making and the history of the globe.

Over the summer term the Globe Project delivered workshops to 10 secondary schools involving approximately 270 secondary school pupils. Most of these were delivered at the Museum of History of Science and included activities such as model globe-making, historical enquiry into the period of the Great Age of Discovery, and hands-on investigation of navigational instruments. A workshop at the Oxford University Museum of Natural History focused on Darwin’s voyage and evidence for biodiversity. One community group of 10 adults with learning disabilities and their helpers had a very rewarding experience taking part in a globe-making workshop at the Museum of the History of Science.

The Project generated a tremendous response from community volunteers initially recruiting 20 volunteers to help with the delivery of the events. Dedicated teams of four volunteers were established for each globe to carry out ‘behind the scenes’ preparation between events, and to co-curate the programme of activities and globe themes. Over the period of delivery a total of 26 volunteers were involved contributing over 200 hours of volunteer work. Volunteers enjoyed a celebration event at the Museum which was attended by the retiring Director, Professor Jim Bennett, and other staff who had been involved in the project including three of the cohort of four HLF ‘Skills for the Future’ trainee education officers.

We felt that one of the unique features of the project was the opportunity it gave volunteers to be involved in an extended experience of participation. There was lots of positive feedback about this; one volunteer said, “It gives the volunteers (and participants) a sense that they are building something. It also makes the museum experience more than simply learning and taking something from the museum – it gives the visitors (and volunteers) a chance to feel as though they are giving back.”