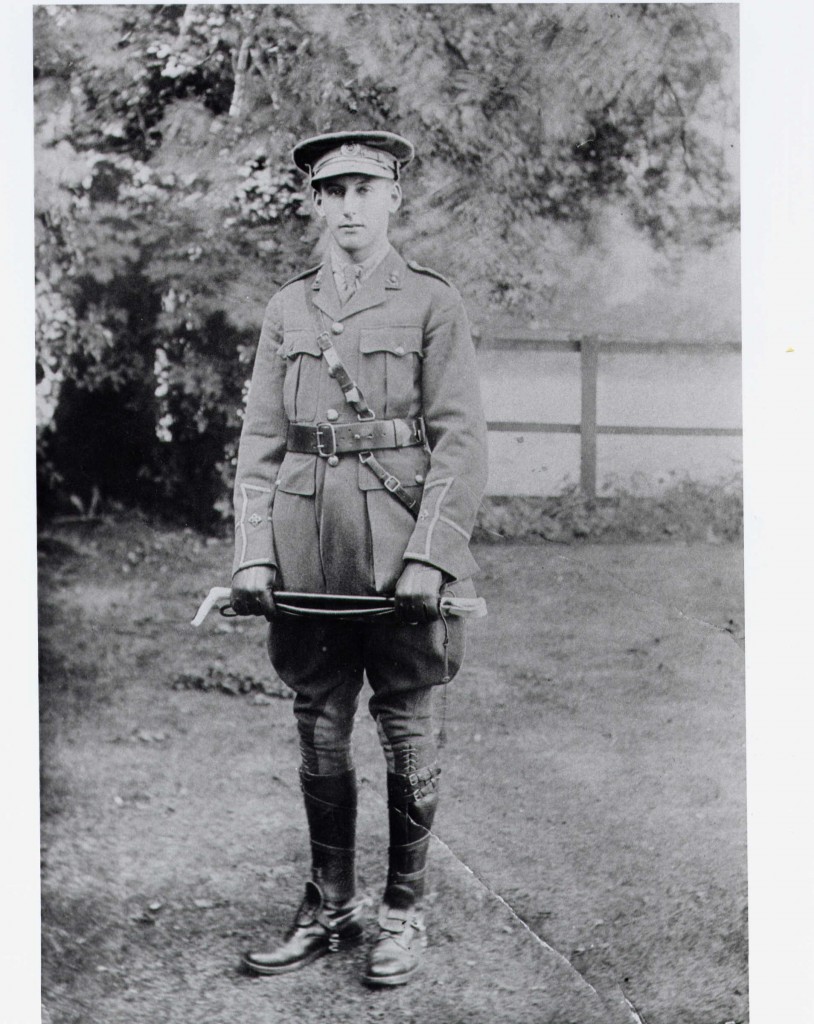 No Corps of Signals existed in those days. Signalling was very much the province of the Royal Engineers and specifically its Telegraph Battalion and it was they who attempted to use wireless for the first time in a military conflict during the Boer War in South Africa. But it was not equal to the task and it was left to the Royal Navy to show the way. And show it they did during the blockade operation they were mounting in Delagoa Bay, Portuguese East Africa. Wireless proved itself at sea; it was still to do so on land.

In 1908 the Royal Engineer Signal Service came into being and it was this body of men, plus their horses, cable carts and much other paraphernalia of war that provided the British Army with its signalling capability during conflict that broke out in 1914.

By now wireless equipment suitable for use by soldiers and rugged enough to be hauled about on carts and on the backs of men was slowly becoming part of the Army’s inventory of equipment. And the officers and men were being trained to use it. Amongst that group was a young South African by the name of Basil Schonland. During the summer of 1915 he completed Part 1 of the Mathematical Tripos at Cambridge and immediately set his sights on serving his adopted country. Even whilst a schoolboy, and then an undergraduate in his home town of Grahamstown in South Africa’s Eastern Cape province, Schonland was a loyal subject of the King and, along with many of his fellow South Africans, he saw it as his duty to fight for King and Country.

Schonland was commissioned as a second lieutenant in August 1915 and immediately began training at the Signal Depot in Bletchley. In October he was given command of 43 Airline Section with 40 men, their horses and their cable carts and in January 1916 he led them into France where they joined the Fourth Army then being formed under Sir Henry Rawlinson.

It was the Battle of the Somme that saw wireless equipment pressed into service in earnest. Though hundreds of miles of telephone and telegraph cables had been laid only those buried at considerable depth had any hope of surviving the onslaught of almost incessant artillery barrages. Visual signalling by flag, heliograph and lamp was perilous in the extreme for the operator who raised himself mere inches above the parapet of a trench: wireless became almost obligatory. And Schonland, whose skills had already been noted, was soon to become a W/T officer in the Cavalry Corps. None was more enthusiastic. 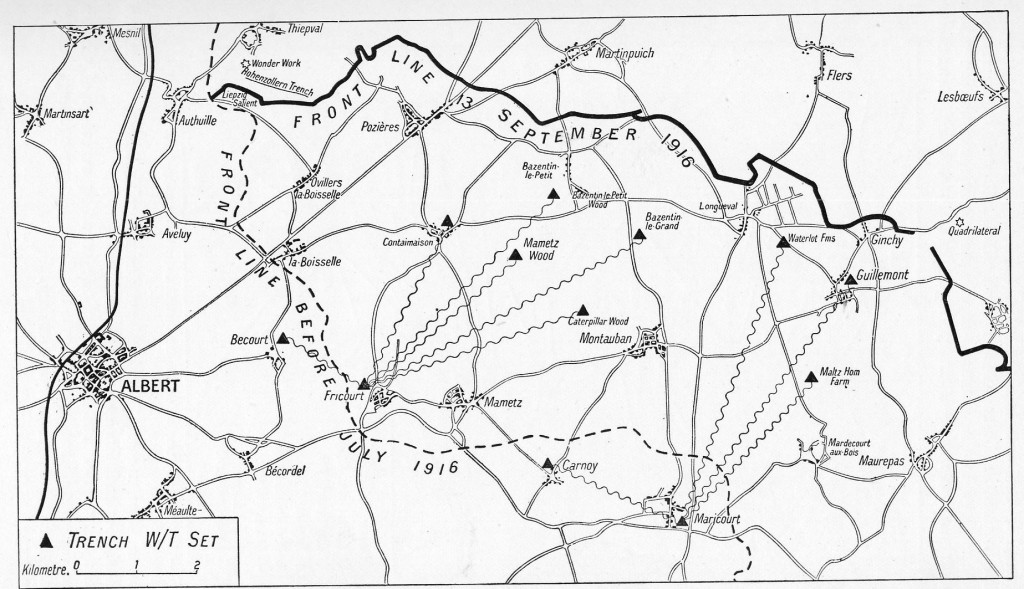 Map showing the deployment of the wireless sets near the front line in September 1916. Image available in the public domain.

This new technology caught the imagination of a young man for whom science, and especially physics, was of almost overwhelming interest. He threw himself into mastering the wireless equipment and of passing on his knowledge to his men. The three trench sets with which Schonland became so familiar were the BF Set, the Wilson Set and the Loop Set. The ‘BF’ presumably meant “British Field” but to those who used it in earnest its eponymous letters had another meaning entirely! Like most of the equipment in use at that time the BF set had a spark transmitter and carborundum crystal detector. It radiated signals over a band of frequencies between about 540 and 860 kHz at a power of some 50 watts. The Wilson set was more powerful and used a more sophisticated method of generating its spark. The frequencies (or wavelengths in those days) that it covered were similar to the BF Set. Both were used extensively from within the trenches during First Battle of the Somme in September 1916.

In 1917 a new wireless set was introduced. Called the W/T Set Forward Spark 20 Watt B it soon became rather more familiar by the less wordy name of the Loop Set. The loop in question was its peculiar aerial (or antenna) which consisted of a square loop of brass tubing 1m per side that was mounted vertically on a bayonet stuck into ground. The Loop Set’s other great claim to fame was that it was extremely simple to use even for an inexperienced operator. Morse code was the mode of transmission and that skill was fundamental to all who served in the R.E. Signal Service, officers included. Of particular importance, especially to the technically-minded such as Schonland, was the much higher frequency on which the Loop Set worked. It could be tuned to transmit and receive between 3.8 and 4.6 MHz and was claimed to have an effective range of 2000 yards. And though the transmitter still used a spark, the receiver contained two thermionic valves – an astounding technological leap at that time.

By then Schonland had left the front line and was instructing at the GHQ Central Wireless School at Montreux where he was also promoted to lieutenant. It was there that he and another South African by the name of Spencer Humby conducted their own ‘researches into wireless’ which they published in a scientific journal soon after the end of the war. “The wavelengths radiated by oscillating valve circuits” became an important paper in the field of wireless communications that flowered in the 1920s.

But Schonland was not only a competent physicist; he also wielded an educated pen and his most lasting contribution to wireless communications during WW1 was his four-part series of articles published in 1919 in The Wireless World. They appeared under the title of this article and described the use of wireless in the trenches and were possibly the first such articles to tell how wireless was used during the war by the R.E. Signals Section. The Boy’s Own Paper had nothing on them for verve and excitement! Take this passage in which the young Schonland describes an attack during the battle of Arras in which a key hilltop position had been captured by the British Army. However, the enemy was re-grouping below and a counter-attack was imminent.

Owing, however, to the speed of their advance our troops were out of touch with the higher command, and the guns behind them. Out of touch, did I say? What is this queer mast affair some sappers are rigging up in the garden of what was once a pretty cottage? Up go the small steel masts in spite of the shells streaming into the village … The aerial up, it is not long before they have installed their tiny set in the cellar and are ‘through’. R9 signals each way. Just in time too, for the Boche at the foot of the hill shows signs of counter-attack. “Get at the guns, Sparks, get at the guns!”. And Sparks bends to his key …

By the war’s end Basil Schonland had been promoted captain and was in charge of all wireless communications of the British First Army. Under him he had thirty officers and more than 900 hundred men, along with over 300 wireless sets. And soon, after the end of hostilities, strenuous efforts were made to retain his services as Chief Instructor in Wireless in the British Army. But Schonland was intent on following a career as a scientist and he returned to Cambridge to work under Lord Rutherford at the famous Cavendish Laboratory. However he was not lost entirely to the colours for a mere twenty years later he was back in uniform and served throughout the second great conflict with distinction, ultimately as scientific adviser to Field Marshal Montgomery’s 21st Army Group.