The entire British Pathe archive of over 85,000 films is now available on YouTube at https://www.youtube.com/user/britishpathe

Two particular films of interest are:

Wireless Installation On Train (1914-1918) which shows a wireless mast being installed on top of a stopped train.

It was the latter of film which was of particular interest – the description below the video stated that the location of events was unknown and that the nationality of the soldiers were not absolutely certain but might be Belgian. 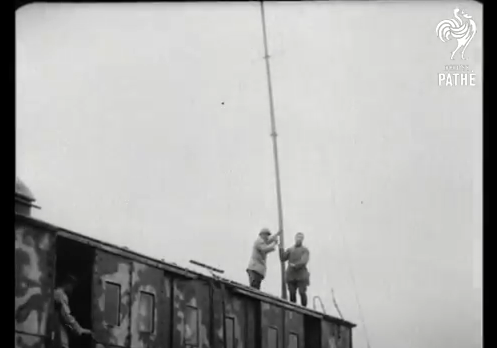 Screenshot of wireless mast being put up from British Pathe film, Wireless Installation On Train (1914-1918).

An answer came via one of our subscribers and Len Blasiol on the Modern Conflict Archaeology Facebook group that the soldiers were definitely French officers and men:

The helmets look a bit like those of Poilu although it’s difficult to tell with certainty whether they have the metal ridge. However, there are two officers in the scene. One leans out of the railroad car at two points, and the other walks up near the end. Both of them have a quatrefoil on the top of their kepi. 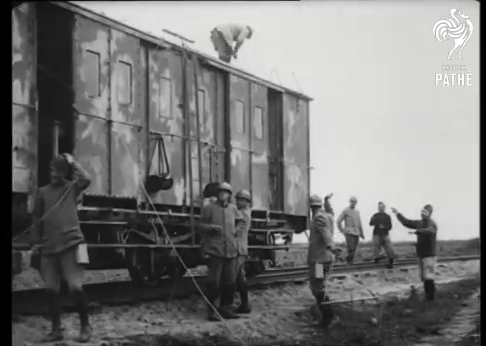 Screenshot of group of soldiers beside the train from British Pathe film, Wireless Installation On Train (1914-1918).

So this rather begs the question: why and how were they using a wireless system on a stopped train and where and when might this film be from?

Please answer in our comments below!

Update: Chris Phillips from the University of Leeds, an expert on the logistical administration, in particular trains, of the British Expeditionary Force on the Western Front from 1914 to 1918, suggested that this might be an advance headquarters.  For example, Haig had a train advanced headquarters but Chris was unable to comment on how common this might have been in the French Army.

Might anyone be able to provide any further information?