From now on we intend to post regular short interviews  with experts in the fields of the history of science, Jewish history, Jewish science, and astrolabes, the fields in which our research project fits.

Prof. Silke Ackermann (http://www.baltic-college.de/hochschule-tourismus/lehrende/silke-ackermann.html) has been a curator at the British Museum for more than fifteen years, period in which she was in charge of the scientific collections (among them astrolabes). Whilst she was working at the British Museum Silke got involved in setting up the Jewish Astrolabe project and participated as co-investigator. However, her new job as president and professor of the Baltic College (in which she has introduced a MA in Cultural Tourism) separated her from her initial role in our project. Nevertheless, she remains interested in this research and is a member of the board of advisors. Thus Prof. Ackermann and the researcher of the project, Dr. Josefina Rodríguez-Arribas, studied together in August 2012 one of the astrolabes considered in this research (a 11th century Muslim astrolabe with Hebrew inscriptions preserved in the Staatsbibliothek zu Berlin – PK). It is a great pleasure to count on her experience and expertise with scientific instruments. For this reason, we have decided to start this new section of our blog with her. 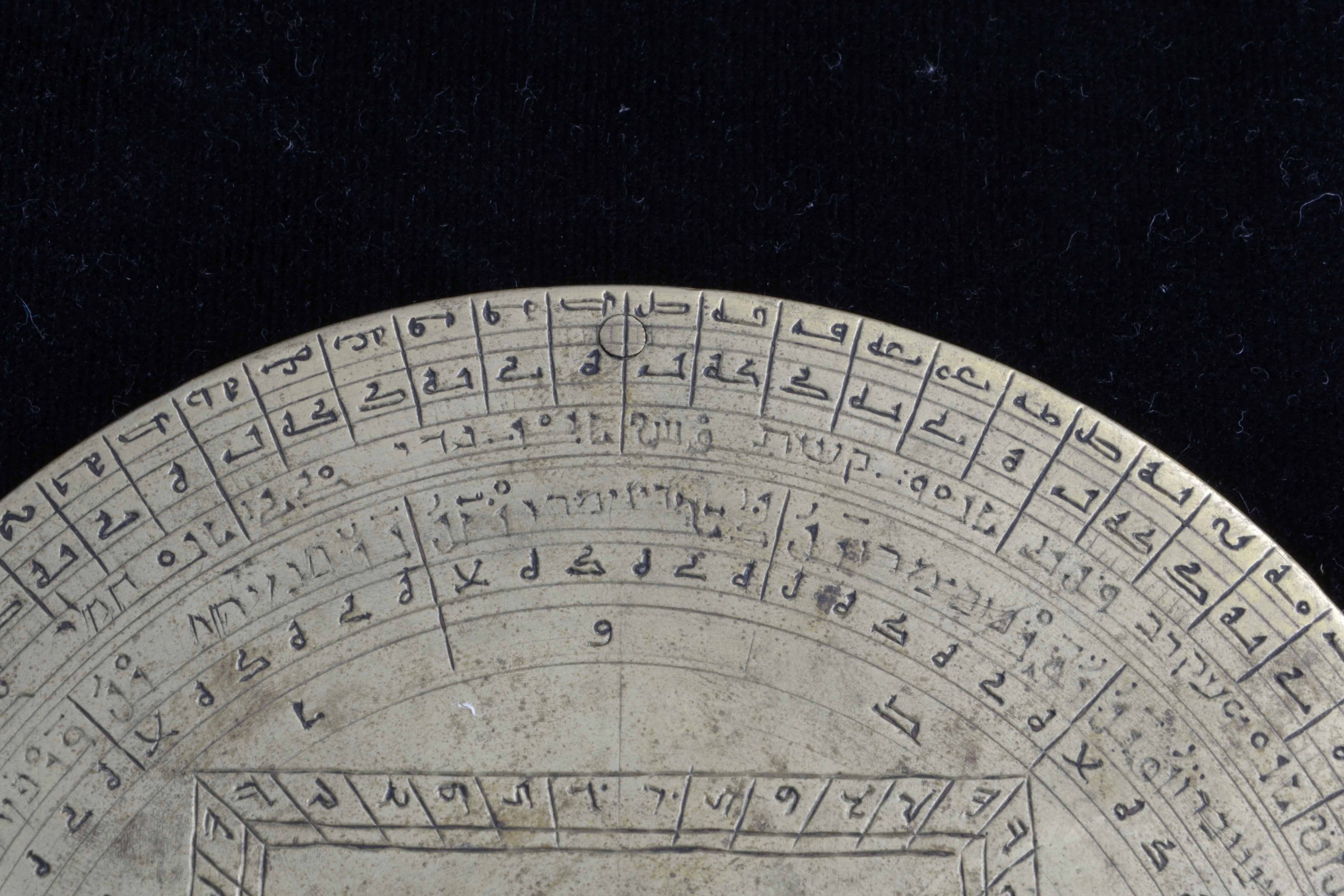 JRA: What is an astrolabe? Were astrolabes common objects in the past?
SA: An astrolabe is one of the most sophisticated instruments ever constructed before the invention of the computer – and at the same time it is relatively easy to use. Basically it is a two-dimensional projection of the three-dimensional celestial sphere – similar to a map being a projection of the earth. It can be used in many different ways, for example to tell the time during the day and at night-time, to estimate the time of sunrise and sunset, to determine the time of prayer in the Islamic World, to make certain astrological predictions, to measure angles etc. etc. to name but a few of the manifold uses.
About a thousand astrolabes are known to have survived, many more will have been constructed according to treatises written in various languages from Greek and Latin to Arabic and Hebrew as well as English, French, German, Spanish, Italian and others. They were mostly made of brass and thus very costly (and thus very special) at the time, but we also know of designs for instruments that could be cut from paper and then pasted onto card or wood – a kind of make-yourself version. These will have been more common and used by different people for various functions.

JRA: There were many scientific instruments before the Scientific Revolution of the 17th century. Can you mention some of them for our blog? What is distinctive of astrolabes in relation to all of these instruments?
SA: If one looked at astronomical instruments alone or even just time-keeping instruments there were, indeed, quite a number before the Scientific Revolution such as sundials of virtually infinite designs, quadrants and nocturnals to name but a few. The intriguing feature of an astrolabe is that it combines so many functions and that its basic designs remained virtually unchanged for nearly 2,000 years.

JRA: Why are there astrolabes engraved with different languages? Leaving aside the languages, are there other differences among the extant astrolabes or all of them are similar except for the script?
SA: Astrolabes are truly cross-cultural. The ancient Greeks are credited with the invention of the instrument (or rather: with the discovery of certain mathematical principles that allowed its construction). But the instrument was further developed and used by virtually all cultures that came into contact with it. This is why so many different languages can be found on one instrument, such as the star-names in Arabic or a Latinized forms of Arabic (or a vernacular thereof) of even different languages together when an instrument was for example made in the Islamic World and later used by a Latin scholar who may have added some features in Latin or another who added Hebrew markings. The different languages often tell us the most intriguing stories about an instrument’s history.
There are certain basic features every astrolabe possesses – but many features can be added or omitted at will. Additionally astrolabes can be of the most intricate design and a pure joy to behold – which must be one of the reasons why so many have survived even at a time when they were long out of use. They are just utterly beautiful and from very early on became collectors’ pieces.

JRA: Astrolabes seem to have been known in Europe, Northern Africa, the Near East, and India. Did other cultures like the Far East or pre-Colombine America have astrolabes or similar objects?
SA: I have so far not come across genuine instruments from the Far East or pre-Columbian America, but that does not mean that they do (did) not exist.

JRA: You have been a curator of scientific instruments at the British Museum for many years and now you are teaching at the Baltic College in Schwerin (Germany). What is the interest of studying astrolabes (pre-modern instruments) in the 21st century? Are you able to bring the subject of astrolabes and their historical background into class? How?
SA: In my current role at the University of Applied Sciences at Schwerin in North-East Germany I have so far had very little opportunity to discuss astrolabes. But I am trying to introduce students to the role of objects as historical sources on a par with written documents. The study of astrolabes enables us to bring long-gone periods such as the Middle Ages or the Renaissance to life, to shed a light on the in-depth knowledge of astronomical and mathematical features and on the intercultural exchange that took place.

JRA: We know that you are also very interested in Jewish astrolabes. Your interest in Judaism, where does it come from? What has Judaism to do with astrolabes?
SA: I have always been interested in history and in the sharing of knowledge and ideas between the three great religions of the book (namely Judaism, Christianity and Islam). I am fascinated by the way in which cultures influenced by one or more of these religions used, adapted and developed this intriguing instrument – and how the instruments and related texts mirror the thought-processes behind this exchange. For many years I have researched the exchange of ideas in the Middle Ages and the Renaissance and it became increasingly clear to me how little I actually knew about the role Jewish scholars had in this process of transmission.

JRA: As an expert in scientific instruments, what is the question about astrolabes and Jews that any serious research on the subject should answer or inquire into?
SA: When I first suggested a research project on the role of the astrolabe in Jewish communities in the Middle Ages it was born out of a certain frustration that I could find so little information in my sources and in the literature on what this instrument actually meant for these communities, how it had been used and why and by whom. If the outcome of the project manages to answer some of these questions I would be thrilled.