I’ve been asked to write something about my experiences of the use of Penicillin in its very early days.

I started my First Part Midwifery Course at the Radcliffe Infirmary in September 1941, & was there for 6 months. However due to failing the examination twice I had to take a three month refresher course between September and November 1942 – when I finally passed!

At some time during these two periods I ‘specialled’ a woman in the isolation ward who developed puerperal fever after being delivered of an 11lb bruiser with red hair.

This woman would normally have died but due to Penicillin provided by Mrs Dr Florey, who was working with her husband, she survived. This was administered in […] intramuscular injections, & was very crude and bright yellow. It also had to be reclaimed by saving the patient’s urine, & woe betide the nurse who accidentally threw it away! Nora […], who as Nora Stanley-Smith was at the Racliffe with me remembers another occasion when Penicillin was used. This was a woman with thrombosis of both legs, who had been delivered of twins on the district & was brought in. She too survived, when normally she would have died.

As this was rather a long time ago & we took it all in a day’s work & hardly realised that it was history in the making although we looked up to the Floreys – This account may not be intirely accurate but the gist of it is true as I remember it. 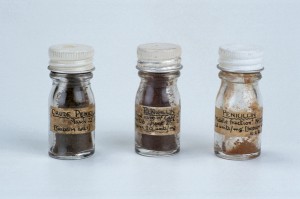 Our first historic story has been transcribed from a letter written by Susan in which she discussed her experience of penicillin as a nurse who worked at the Radcliffe Infirmary during the later years of the Second World War. Susan would have been one of the first nurses to administer penicillin to human patients. The development of penicillin for combating serious infections in humans was a dramatic breakthrough in the history of medicine. It has been called one of the greatest success stories of the 20th century and has saved an untold number of lives. Susan’s story shows us how we may be so caught up in tasks and jobs we love that we can often miss the significance of scientific discoveries around us.

During the Second World War, and Susan’s time at the Radcliffe Infirmary, a group of doctors working at Oxford developed a therapeutic strain of penicillin to be used in the human body. This team included Dr Norman Heatley, Dr Margaret Florey (née Jennings), Dr Howard Florey and Dr Edward Abraham. They built on the work of Dr Alexander Fleming who had determined the antiseptic properties of penicillin ten years earlier. The Museum of the History of Science has a number of objects from the Oxford team, including the original Penicillin culture. There is a display on the work in the basement gallery; have a look when you next visit and when reading about the Nobel Prize winning doctors involved, remember Susan and her more everyday story of the science involved.

Special thanks to Anthony at the Museum of the History of Science for providing this amazing story and the letter and photograph to go with it! Any transcription mistakes are our own.