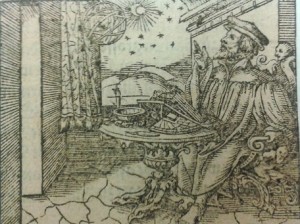 The researcher-cataloguer team at MHS have now finished cataloguing the prints collection, thanks to funding from the Arts Council England under the Designation Development Fund. We are now putting together an exhibition for the museum for early 2014. 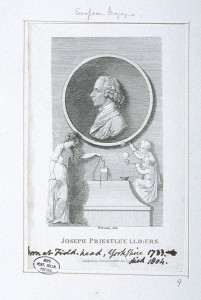 We’ve been excited and amused by much of what we’ve uncovered while cataloguing over 1200 prints in the collection. It includes a range of popular techniques for making prints from the fifteenth to nineteenth centuries, including woodcuts, different styles of engravings, made using copper and steel, in line and stipple treatments, lithographs, and methods of hand and machine colouring in using inks and watercolours.

The prints collection was physically curated by our archivist, Tony Simcock, into subject-based folders over the years. Themes included astronomy, architecture, aeronautics, medicine, chemistry, pharmacy. You can see from looking in each folder how subjects have been depicted and treated in illustration over time, such as the depictions of laboratories from satires of an alchemist’s lab to a modern chemistry lab.

Within the prints collection, there is a special collection of portraits of scientists. Many of these are engravings, mainly in line and stipple, created after older portraits and likenesses. Seventeenth- and eighteenth-century portraits of natural philosophers, astronomers, astrologers, antiquaries, surgeons, botanists and alchemists are often line engraved and represented in cartouches or as busts surrounded by representations of their subject (such as William Harvey Inv. No. 14459). Some of these include allegorical imagery, as the example of Joseph Priestley shows (Inv. No. 97347).

Some of the likenesses are less flattering: the example of John Evans (Inv. No. 33472), a seventeenth-century astrologer who was as famous for his debauched lifestyle as he was for his skills in mathematics, and can be seen here in an early nineteenth century stipple engraving.

Before the exhibition we will sharing interesting items on Twitter – do take a look via the new @MHSCollections account!